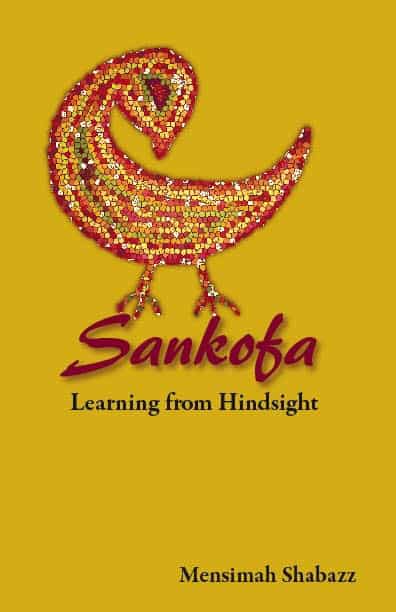 “Sankofa: Learning from Hindsight”, is an autobiography that begins with my life growing up in Ghana, West Africa. It presents a cross-cultural perspective living in different countries (Ghana, Italy, Brazil, United States) and synthesizes ancient wisdoms from my culture. I articulate the tremendous demands made on me as an African woman and share ways of using spiritual transcendence as a vehicle torwards empowerment.

This story also shares the wisdom, resilience and unforgettable lessons as in many women’s stories. I believe that every woman that reads “Sankofa: Learning from Hindsight”, especially those searching to recap and bring value to their life experiences, would benefit immensely from the transformational processes that are highlighted and experience love, peace, joy, and abundance.

Mensimah Shabazz’s memoir, Sankofa: Learning from Hindsight, is a beautiful autobiography about her life and experiences along the way to self-realization and strength. It is filled with spiritual insights and life empowering soundness. Full of wisdom and intelligence, Shabazz grew up in Ghana, West Africa. She compares the different cultures and how they affected her as an African woman. She describes the rigid orders placed upon her and how she overcame them through spiritual transcendence that lead to overwhelming empowerment.

She writes with both dignity and emotion, telling of her struggles and triumphs, in a language that is honest and clear. Her story is very relatable for any woman, and she states that spiritual transcendence is the key to personal empowerment and wisdom.

This is one of the best memoirs I have ever read. As it is not only the story of Mensimah Shabazz’s experiences, but it is also a self-help guide for all people who are seeking healing, self-empowerment, wisdom and joy. It is written very well and embodies the graciousness, dignity and wisdom that Mensimah Shabazz possesses.

I was very inspired by Sankofa: Learning from Hindsight. I couldn’t put it down as I turned the pages quickly to follow Mensimah Shabazz’s journey.

Sankofa: Learning from Hindsight is a must read memoir and autobiography. It is interesting, engaging and thought-provoking. This book will inspire and change the way one thinks and lives. It is a roadmap to peace, joy and fulfillment. Chick Lit Cafe fully recommends it to all discerning readers who are looking for a great read that is full of wisdom and sound advice.

The word Sankofa is taken from the Twi language of Ghana that translates to “Go back and get it” (san – to return; ko – to go; fa – to fetch, to seek and take) and also refers to the AsanteAdinkra symbol represented either with a stylized heart shape or by a bird with its head turned backwards while its feet face forward carrying a precious egg in its mouth. Sankofa is often associated with the proverb, “Se wo were fi na wosankofa a yenkyi,” which translates as: “It is not wrong to go back for that which you have forgotten.”

The sankofa bird appears frequently in traditional Akan art, and has also been adopted as an important symbol in an African-American and African Diaspora context to represent the need to reflect on the past to build a successful future. It is one of the most widely dispersed adinkra symbols, appearing in modern jewelry, tattoos, and clothing.